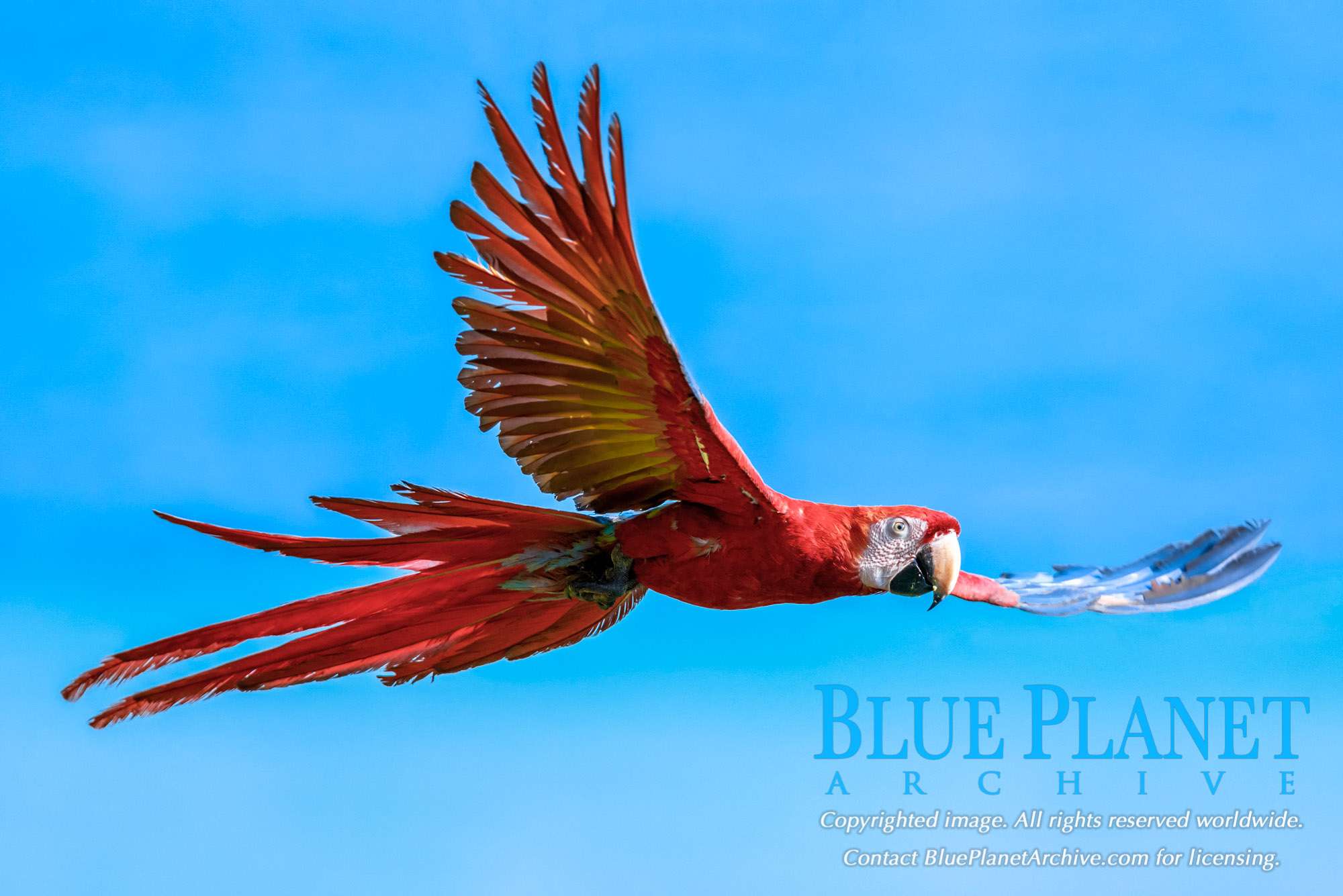 Chances are that you have seen the scarlet macaw in movies, pictures, or resorts. Its image conjures up ideas of warm weather, relaxation, and paradise. In the wild, it is even more majestic, attracting conservationists, biologists, and aviculture enthusiasts alike and drawing the eye to its striking plumage colors of red, yellow, blue, and green.

Being the national bird of Honduras, it is commonly associated with Latin American culture. The scarlet macaw makes its home in Central and South America and thrives in tropical forests, woodlands, and savannas. Its range is vast and extends from southeastern Mexico to the amazon in Peru, Columbia, Bolivia, Venezuela, and Brazil.

Habitat destruction and the capturing of the scarlet macaw in the parrot trade has devastated local populations in the past; however, it is luckily still considered quite common, and the IUCN lists its conservation status as Least Concern.

The scarlet macaw only weighs a little over 2 lbs. and measures about 32 inches long, over half of which is made of its colorful tail. Its plumage is mostly red, but its tail feathers don a light blue hue and its upper wings contain yellow, dark blue, sometimes green, and the underside of the wings have metallic gold.

Having the intelligence of a 4-8 year old child, the scarlet macaw is one of the most intelligent birds in existence. They are incredibly inquisitive creatures, and are known to mimic humans while in captivity. They can distinguish between different colors and shapes, and with training, can even solve simple math problems.

Aside from their astonishing communication with humans, they communicate with fellow scarlet macaws through a series of different squawks, screams, honks, and squeaks. These vary between high and low pitches and are incredibly loud, being capable of being heard for over two or three miles.

The scarlet macaw’s diet mainly consists of fruits and seeds, and they are known as “seed predators.” This means that they do not disperse the seeds they eat in the same way that other bird species do.

Being monogamous birds, scarlet macaws will remain with one partner for their lifetime and lay two to three eggs at a time per season. The eggs hatch after five weeks, the chicks leave the nest after three months, and leave their parents after a year.

This beautiful animal is an early example of captive breeding, as they have been being bred from as far back as the 11th century in Mexico. Today they are found in captivity commonly throughout the world, but this captivity is best represented in the Americas.

Although they live an average of 50 years in the wild, they can live up to 75-90 years in captivity. The scarlet macaw is an animal filled with boundless character and stunning beauty, and we hope that their plentiful populations will continue for the benefit of future generations and our planet.